AN ARCHIVE DOCUMENTING MEDIA STORIES ABOUT THE FILM PROJECT.

A few years ago, I wrote the following about saxophonist Thomas Chapin in a Wall Street Journal piece:

The standard bird’s-eye view of New York’s jazz scene in the 1980s and ’90s depicts a mainstream revival of 1960s tradition, a wild and woolly downtown, and nothing in between. The truth on the ground was more fluid. There were musicians—some experienced, others on the rise—whose deep knowledge of tradition, engaging manner, exalted skills and adventurous spirit naturally bridged such divides.

But Chapin died of leukemia on Feb. 13, 1998, three weeks shy of his 41st birthday. We’ll never know quite where his music was headed. Still, we can learn more about what gave rise to Chapin’s artistry and what it suggests for the future.

In that regard, I’ve been following the development of Stephanie Castillo’s documentary, “Night Bird Song: The Thomas Chapin Story.” (You can see some of it here.) Continue reading at ﻿http://blogs.artinfo.com/blunotes/2016/01/night-bird-song-thomas-chapin-doc-completed/﻿ 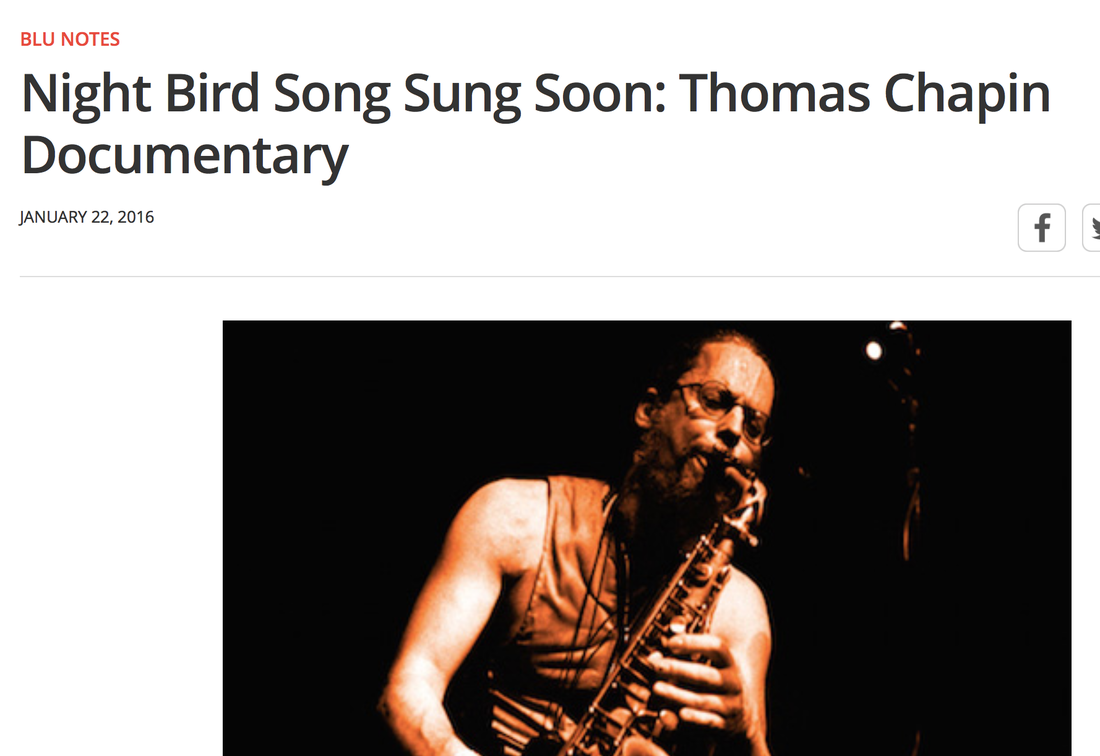 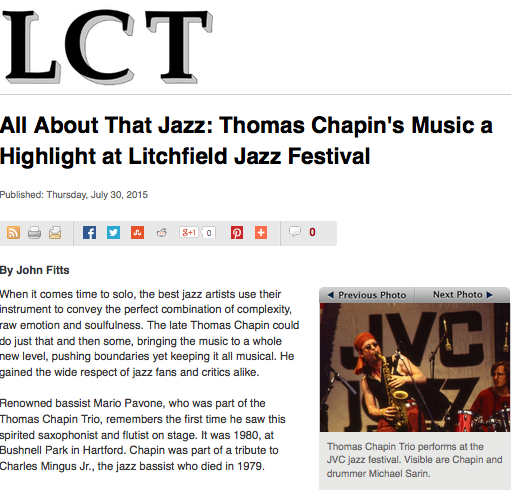 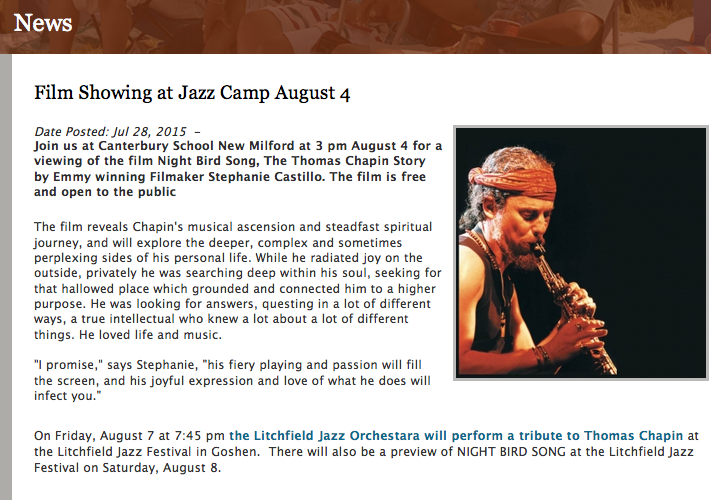 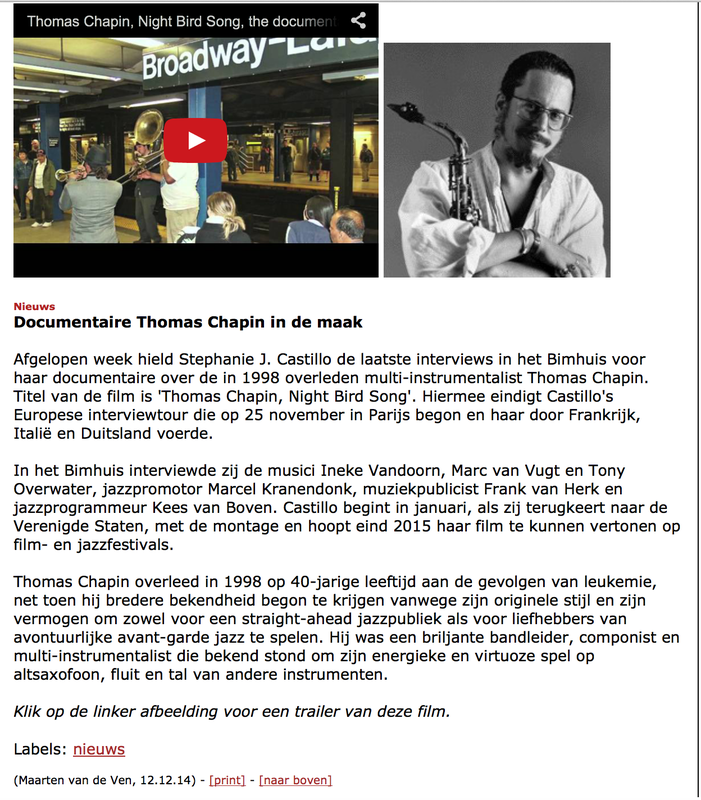 Last week Stephanie J. Castillo held her last interviews at the Bimhuis for her documentary about  multi-instrumentalist Thomas Chapin, who died in 1998. Title of the film is Thomas Chapin, Night Bird Song. The interviews at the Bimhuis concluded her Europe tour, which started on Nov. 25 and has taken her to France, Italy, Germany and the Netherlands.

At the Bimhuis she interviewed jazz musicians Ineke Vandoorn, Marc van Vugt  and Tony Overwater, jazz promotors Kees van Boven and Marcel Kranendonk and music writer Frank van Herk. Castillo starts editing the film soon after her return to the States in January. She hopes to be able to show the film at the end of 2015 at film and jazz festivals.

Thomas Chapin died in 1998 of leukemia at the age of 40, just when he was gaining wider recognition for his original style and his natural ability to play to both straight-ahead jazz audiences and adventurous avant garde jazz fans.
He was a brilliant bandleader, composer and multi-instrumentalist known for his energetic and virtuosic playing of the alto saxophone, flute and many other instruments.

Click at the link of the trailer [ which was also included in the article; Evert ] 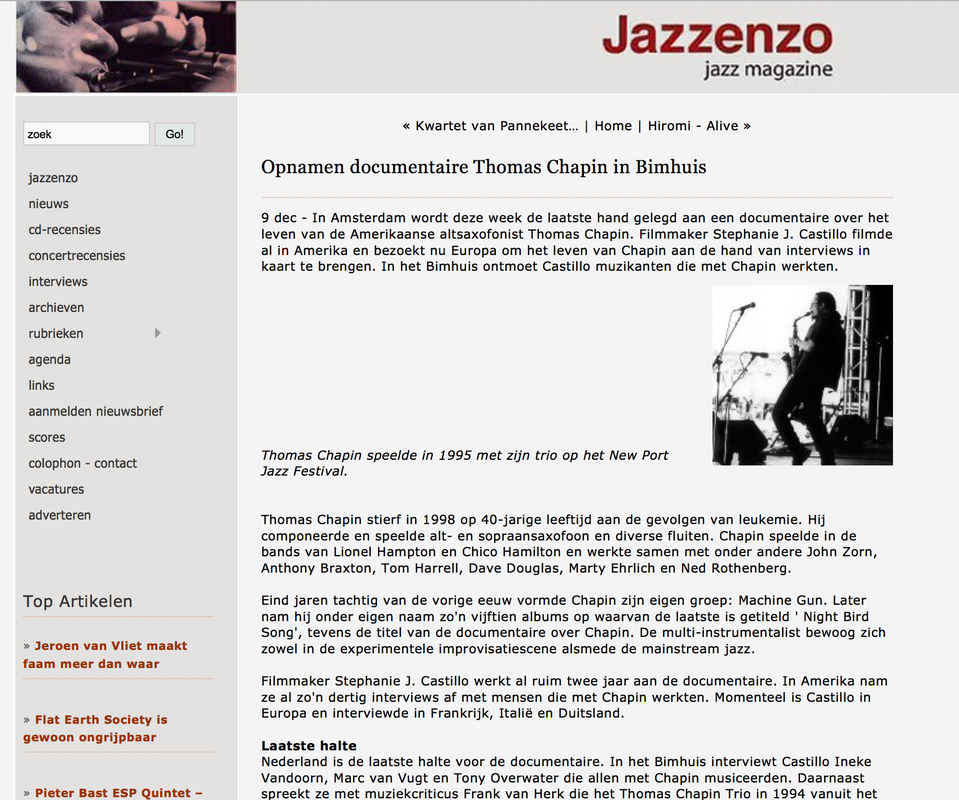 Filming documentary about Thomas Chapin at the Bimhuis

This week the last filming for a documentary about the life of the alto saxophone player Thomas Chapin is taking place in Amsterdam. Film maker Stephanie J. Castillo filmed already in the United States and is now touring through Europe to reconstruct the life of Thomas Chapin by making interviews. At the Bimhuis she meets musicians who worked together with Thomas Chapin.

Thomas Chapin died 1998 at the age of 40 of leukemia. He was a composer and played the alto and soprano saxophone and different kinds of flutes. He played in the bands of Lionel Hampton and Chico Hamilton and worked together with John Zorn, Anthony Braxton, Tom Harrell, Dave Douglas, Marty Ehrlich and Ned Rothenberg.

At the end of the eighties he formed his own band Machine Gun. Later on he recorded some 15 records under his own name, of which the last one is titled Night Bird Song, which is also the title of the documentary. The multi-instrumentalist manifested himself in the experimental improvisation scene as well as in the main stream jazz.

Film maker Stephanie J. Castillo is working for more than two years now on her documentary. In the States she interviewed already about 30 people who worked with Thomas Chapin. At the moment she is in Europe making interviews in France, Italy and Germany.

Last stop
The Netherlands is the last stop for her documentary. At the Bimhuis Castillo interviewes Ineke Vandoorn, Marc van Vugt and Tony Overwater, who all played with Thomas Chapin. She also speaks to music writer Frank van Herk, who reviewed a concert of the Thomas Chapin Trio at the Bimhuis in 1994.

The documentary “Thomas Chapin, Night Bird Song” is financed through crowd funding. Next year fall the documentary will be shown at jazz festivals in America and Europe. Castillo hopes to get distributors interested in showing the film on television. 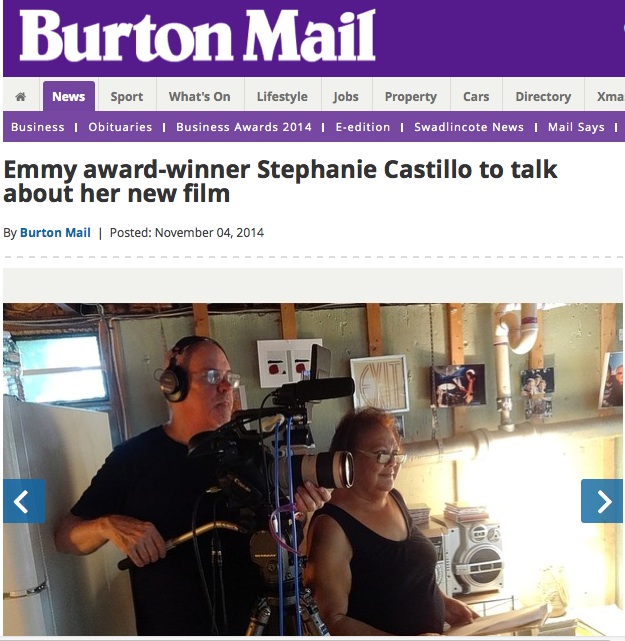 On February 13, I launched a 45-day, online, global fundraising campaign on kickstarter.com and started a press campaign to support my efforts.  Here are the online blogs, websites and ads that are running til March 30 when the campaign will end.  These blitzes have the potential to reach many, many thousands and move them to click through to my film's Kickstarter page. The Kickstarter page itself is a big advertising campaign! Besides raising funds needed to film my doc this summer, it is raising awareness! I am planning to succeed. We shall see!!! 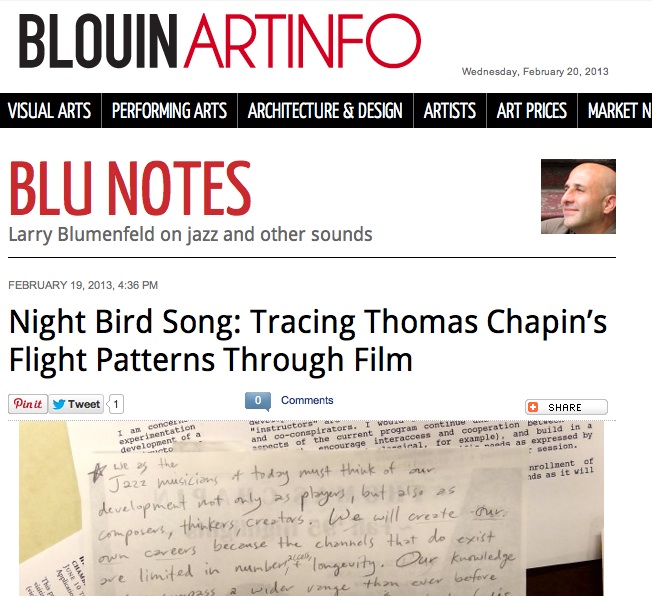 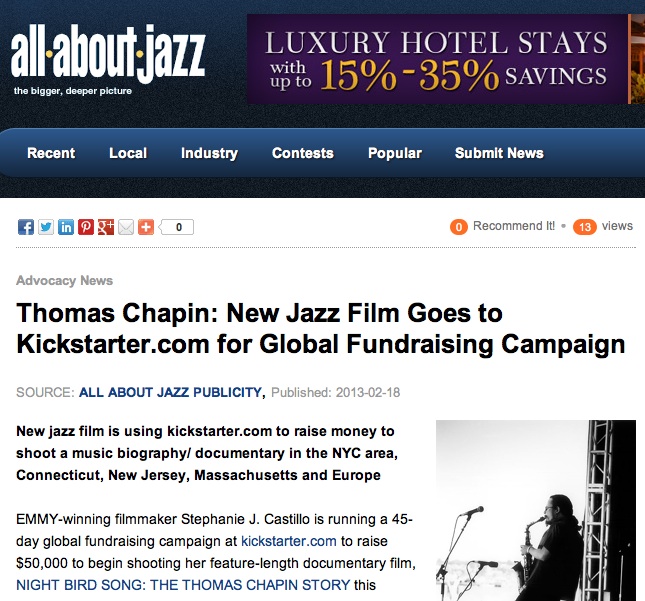 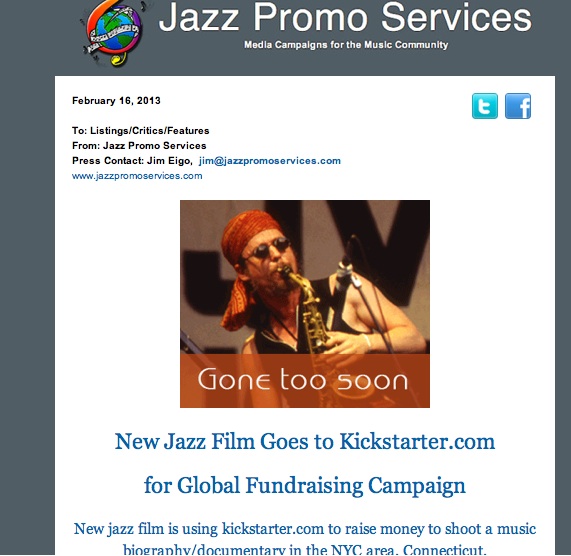 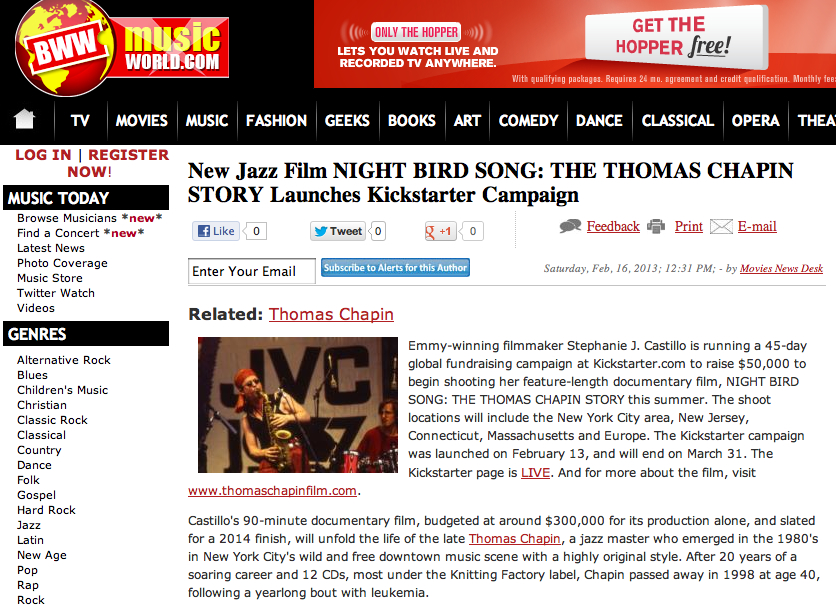 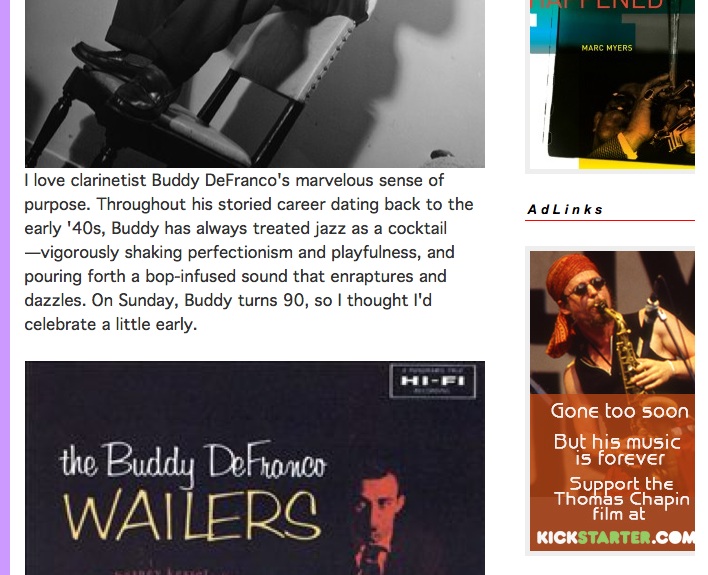 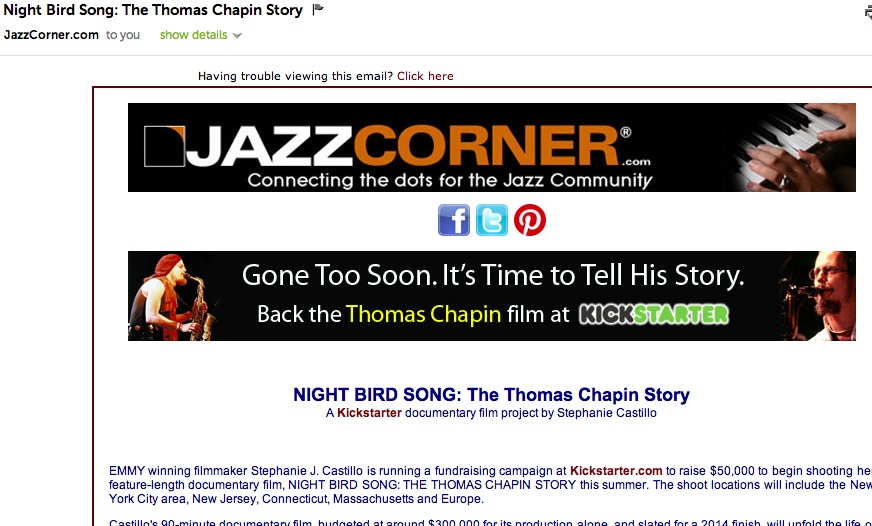 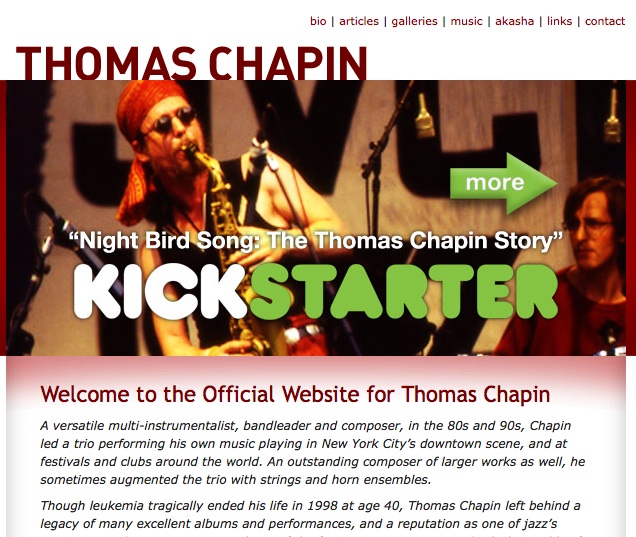 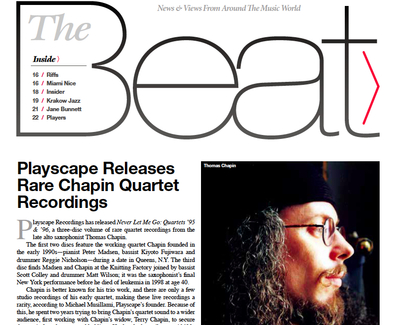 Stephanie J. Castillo continues her research for NIGHT BIRD SONG: THE THOMAS CHAPIN STORY, her jazz documentary on the downtown NYC jazz scene of the ’80′s and ’90′s where Thomas Chapin made his name. This month her research interviews include Michael Dorf of the old Knitting Factory; Larry Blumenfeld, jazz writer; and Paul Jeffrey, jazz educator, jazz master, and Chapin’s mentor. A 90 sec. trailer is on YouTube.

Public Reception Honors Saxophonist Thomas Chapin
December 03, 2012|By OWEN McNALLY, Special To The Courant, The Hartford Courant
Although Thomas Chapin, a phenomenal saxophonist, flutist and composer from Manchester, died in his prime when he was only 40 in 1998, his rich musical legacy lives on in the international world of the jazz avant-garde....

Tuesday, December 11, 2012 – 4pm – 6pm - FREE
RECEPTION FOR RELEASE OF NEW THOMAS CHAPIN QUARTET CD PLUS ANNOUNCING DOCUMENTARY FILM PROJECT ON THOMAS CHAPIN
Real Art Ways - 56 Arbor Street – Hartford
The public and fans of Connecticut jazz artist Thomas Chapin, who passed away at age 40 in 1998, are invited to a free reception to celebrate the release of NEVER LET ME GO, a new 3-CD set of Chapin live-quartet performances from '95 and '96. The gathering will be hosted in person by Chapin’s widow Terri Castillo-Chapin from New York City and EMMY-winning filmmaker Stephanie J. Castillo from Hawaii at Hartford's Real Art Ways on Dec. 11 from 4 p.m. to 6 p.m.

By NATE CHINEN
Thomas Chapin
An alto saxophonist and flutist of rangy intellect and great, gulping conviction, Thomas Chapin was probably on the brink of a breakthrough when leukemia killed him in 1998. He was 40 then, and revered within the downtown scene. But his music felt destined for wider circulation, if you trust the impression left by “Never Let Me Go: Quartets ’95 and ’96” (Playscape). The album, two concerts on three CDs, underscores Mr. Chapin’s connection to jazz custom, even as it ratifies his claim as a vanguardist. In 1995 at Flushing Town Hall he leads a ruggedly articulate working band through tunes by Artie Shaw and Thelonious Monk, as well as by Eddie Arnold and Jimmy Webb. One year later at the Knitting Factory, his home base, he sticks to his own bristling compositions (and one by his touchstone, Rahsaan Roland Kirk) in a jubilant showcase with Scott Colley on bass and Matt Wilson on drums. The pianist in both ensembles is Peter Madsen, whose bond with Mr. Chapin is clear. They should have had much longer to explore it. (no mention of my film, but we shall see)
http://www.nytimes.com/2012/12/09/arts/music/dj-shadow-jim-hall-memory-tapes-and-other-new-releases.html 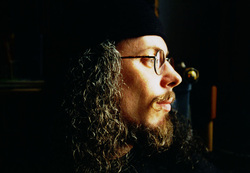 By OWEN McNALLY, Special To The Courant The Hartford Courant December 13, 2012

Although struck down by leukemia at40 in 1998, Thomas Chapin, the phenomenal instrumentalist/composer from Manchester, left behind a rich, life-affirming legacy. What is still very much alive are his recordings, compositions and a wealth of memories in the hearts and minds of anyone who was ever touched by his passionate music or his friendly, unassuming yet deeply spiritual and intellectual presence.

An invaluable chunk of that legacy has resurfaced in a marvelous 3-CD release titled "Never Let Me Go: Quartets '95 & '96" (Playscape Recordings, $29.95), comprised of two previously unreleased live performances freshly tapped from the family archive.  MORE (my film is mentioned at the end)

Interview with Stephanie J. Castillo about her film. Straight No Chaser is a jazz blog, featuring podcasts that bring conversations with the best jazz musicians in the world to your mp3 player. Begin in 1995 by Jeffrey Siegel, the blog was cited by the Wall Street Journal in 2009 as “a great way for readers to discover new artists and lesser-known works from popular performers.” Over one million postings have been downloaded, with over 15,000 listeners from around the world listening each month.

Long-time, Die-Hard Fans Turn Out for Reception
(Hartford, CT) -- Fans of Thomas Chapin, a Connecticut native, attended a free reception at Real Art Ways to celebrate the release of NEVER LET ME GO, a new 3-CD set of Chapin live-quartet performances from '95 and '96. The gathering of some 60 fans was hosted by Thomas' widow, my sister, Terri Castillo-Chapin. We drove up from New York City.
I showed my 15 minute trailer to an excited and enthusiastic group, who watched with great interest, and who later expressed their support with applause and testimonies.
It was here in Hartford that Thomas would join fellow CT musicians to play the clubs. Many who attended the reception recalled attending such performances, and said they always attended if Thomas came home to play.

'I Still Miss The Music I Never Got to Hear'
By LARRY BLUMENFELD
The standard bird's-eye view of New York's jazz scene in the 1980s and '90s depicts a mainstream revival of 1960s tradition, a wild and woolly downtown, and nothing in between. The truth on the ground was more fluid. There were musicians—some experienced, others on the rise—whose deep knowledge of tradition, engaging manner, exalted skills and adventurous spirit naturally bridged such divides.

A film mention!  And CD review

outtakes, Steve Dalachinsky column, The Brooklyn Rail 2/2013 advance peak
One of the most important things in music is the unearthing and issuing of music never before heard by the public by great musicians. So most welcome is the three CD set by Thomas Chapin, “Never Let Me Go” on Playscape. It consists of three plus hours of music recorded at Flushing Town Hall in 1995 and the Knitting Factory in 1996 Chapin’s last concert before being diagnosed with leukemia which he succumbed to shortly after at age 40. Though best known for his trio work, Chapin, a gentle soul and fighter until the end, was, as these rare quartet recordings indicate, both master musician and composer as he flies through originals such as “Sky Piece” and lands back on earth gently with classics like “You Don’t Know Me”, “Ugly Beauty” and the title track, relaxed one moment, tense and exhilarating the next, showing us with every breath his inside/out mastery of  alto and flute, and his wide ranging palette of emotions and expressions ending the sessions with “Lovellevellilloqui” a tune by his hero, Rahsaan Roland Kirk. It’s a beautiful package filled with tender memories.  Also on the horizon a film about Thomas’ life “Night Bird Song.”

10. Thomas Chapin Never Let Me Go: Quartets,’95 & ’96 (Playscape)
When Chapin died in 1998, just shy of his 41st birthday, we were left wondering where his boundless music was headed. These three discs offer hints. They present previously unreleased quartet performances, including the saxophonist’s final gig at the Knitting Factory, the Lower East Side club he helped put on jazz’s map. It’s a liberating cry captured late in a cut-short career.