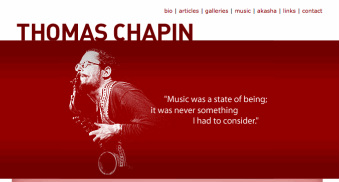 "Like many of the other masters who died so young – John Coltrane (40), Eric Dolphy (36), Charlie Parker (35), Clifford Brown (25) – Thomas’ legend has grown since his departure and will continue to grow.  As with them, the unanswered questions of what might have been are tempered with an extraordinary body of work that they left behind. Not only did Thomas record more than a dozen albums over the last 10 years of his life, but there are numerous recordings and unrecorded compositions that will hopefully become available to help extend his remarkable legacy to future generations of musicians and listeners."
Marty Khan, Manager/Producer/Writer, 2012

A versatile multi-instrumentalist, bandleader and composer, in the 80s and 90s, Thomas Chapin led a trio performing his own music playing in New York City’s downtown scene, and at festivals and clubs around the world. An outstanding composer of larger works as well, he sometimes augmented the trio with strings and horn ensembles.

For seven years in the early 80's, Chapin was Lionel Hampton's musical director and lead sax.  Bred on the old-fashioned big-band circuit--rare for today's jazz musicians--Chapin cut his teeth and learned his lessons well. In 1989, his own group, The Thomas Chapin Trio was born and quickly began performing at festivals and clubs around the world, most notably on the big world stages in the U.S., Europe, Canada and Japan.

While thoroughly schooled in jazz, Chapin was an iconoclast. For a time he explored jazz in tango, flamenco, and South American rhythms and Latin chamber music. He performed his own Brazilian/Afro-Cuban music, and studied and played with the Latin percussionist Louis Bauza, collaborated with an Armenian oud player, played with an alternative rock group, gigged with a country-western band in Kentucky, and toured with blues-man Clarence 'Gatemouth' Brown. To him, it was all music; he never made distinctions. He loved it all.

But his creative core, of course, remained with the Trio. “He felt we had happened onto something,” said Mario Pavone, the Trio's bassist for almost two decades. Chapin called the spark that ignited the Trio's music, "the Thomas Chapin thing" and referred to the Trio as "a magical generator". “I’m constantly amazed that we can play anything, with no restrictions, and people always seem to relate to it," Chapin said.  Pavone's experience with Chapin will be central to the film as well as his perspective that there was a "deliberate mystery" to Chapin’s achievements.

By 1998, the year that he died of leukemia at age 40, critics said Chapin was soaring and “gaining altitude.”  The New York Times called Chapin, "a virtuoso, one of the more exuberant saxophonists and band leaders in jazz.  A typical solo of his moved easily between traditional jazz and the sonic explorations of the avant-garde." Not even a decade after his death, a newly awakened school of disciples and a new-found generation of jazz enthusiasts celebrated his unique, emancipated musical expression.

Chapin's early death ended the exponential growth of his music and popularity.  It left the jazz world stunned. Some have said Chapin seized his life with passion and wrung out every ounce of joy and genius. Peers and critics said he had passed all too early: "We've missed seeing how he would have grown musically, where he would have taken the music."

A distinct improviser, Thomas Chapin made music that was vibrant, exuberant, raucous, beautiful, and provocative. He was a tireless innovator who followed no one and his genius allowed him to go beyond musical boundaries and create a formidable body of works. No matter how complex or adventurous his music, his desire to communicate was indefatigable. The music was always interesting, always accessible. Legendary flautist James Spaulding said, "I believe, were Tom here, still amongst us, his musical achievements would parallel those of the most recognized of our peers.”

A native of Manchester, Connecticut, and born into a family with roots traced back to the Mayflower, he attended a prestigious New England prep school where he might have lost his way and failed had it not been for astute teachers who saw his gift and nurtured and protected it. Troubled by a conservative upbringing, he found music there, and he knew it was his path--and salvation. All who heard him were in "awe at his solos: the skill, the variety, the imagination, and la forza," said Hartt Day Lewis, one of Thomas' teachers and fiercest advocates.

"If I'm really going to be a 'free' musician, I should be free to do whatever I want to do," Chapin once remarked. And he did. He did it with joy and fun and seriousness too. Seriousness because he was a recovering alcoholic who found clarity and focus in a spiritual discipline that helped tame his many personal demons and opened him to the divine side of life, and to creating music that was solidly in the traditions of jazz and at the same time, right on the cutting edge.

And serious also because he had from childhood a racing heart condition that he lived with not knowing when his heart might give out. It made him aim for mastery and not waste a moment saying something, playing something that was not urgent, necessary; he knew he might not be around for a second solo, around for a second chance. "When you feel something," he would say, "that's the time to feel it. That feeling may not come around again."

So he played with demonic intensity, lightening-fast speed. They said he had  "monstrous chops." On stage, he was called a virtuoso and one of this generation’s flute masters. Off the stage, he was known as kind, generous, loving, a beautiful spirit, a friend.

In 2006 in New York City, there were three memorial concerts commemorating the tenth anniversary of his passing, and 65 musicians from all over the world came to celebrate him and play.  His wife Terri saw the love and goodwill and proclaimed, "Thomas Chapin left behind a lot of good, a lot of good karma."

To learn more about Thomas Chapin, read his extensive website at www.thomaschapin.com.  This comprehensive online library contains his bio, articles, interviews, CD and performance reviews, and memories.  See his photographs, view his artwork, listen to his music.

Chapin pushed his saxophones and flute to the bursting point, squeezing out colors and manic, joyous figures in a high-energy performance with his trio Friday night at Hartford’s 880 Club. Under his fleet fingertips, he has the whole free jazz reed tradition of Ornette Coleman, John Coltrane, Eric Dolphy and Albert Ayler. But the tumultuous free jazz spirit of the 1960s is merely a launching pad for his ascensions.
Owen McNally, Hartford Courant, 1994

Like one of his main musical inspirations, Rahsaan Roland Kirk, Chapin approached live performances with an extroverted sense of theater. Also, like Kirk, Chapin’s mastery of his instruments, particularly alto saxophone and flutes, were provocative on their own terms. He was a monstrous saxophonist, and certainly one of this generation’s flute masters.
Larry Blumenfeld, JAZZIZ, 1995

Chapin… is a virtuoso… also one of the more schooled musicians in jazz, both technically and historically, and for his set he dug into the styles of everyone from Benny Carter to the 60’s avant-gardists, screeching and howling and huffing as if this were 1964 and he was breaking the rules of jazz into pieces.
Peter Watrous, The New York Times, 1998

Thomas epitomized masterful jazz saxophone playing. His incredible energy and rigorous standards were significant in his pursuit to fuse inside/outside thrusts in the music through a universal language.  ...When I look at it now, every solo he took was with the thought in mind that he might not be around to play another. Every solo was like two solos.
Mario Pavone, bassist, Thomas Chapin Trio, 2005

Whooooah! To keep up with saxophonist/flautist Thomas Chapin on this one, you’re going to need some of those monkey adrenal glands Hunter S. Thompson wrote about, or at the very least a seat belt and a note from your mom. Ride--and if ever an album deserved an exclamation mark at the end of its title, this is one--is a 72-minute recording of a 1995 North Sea Jazz Festival performance of near-constant, broiling and searing emotional heat. It’s magnificent, monumental and practically unprecedented. Chapin, who died tragically young in 1998, was his own man, but his music resonated loudly with the work of reed giants from an earlier age. Earl Bostic, Rahsaan Roland Kirk and Eric Dolphy are the influences most commonly cited in this regard. Like their music, Chapin’s is drenched in the blues, and his use of vocalization (particularly on the flute) can be traced directly back to Delta penny whistle musicians recorded by musicologist Alan Lomax in the ’30s and ’40s.
Chris May, review of RIDE CD, 2007

Tom Chapin was the real deal. A complete musician in every sense, he created work that was honest, imaginative, well crafted and cathartic. Putting himself into each and every note, he played with a rare and intense passion. His energy was absolutely astounding. He is sorely missed.
John Zorn, internationally renowned downtown saxophonist, 2008