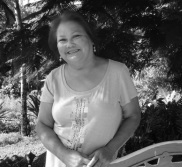 "For those of us who love jazz and Stephanie Castillo's filmmaking, it's very exciting news to learn her next documentary will be about a jazz musician who lived and played in NYC during the 1980's and 90's.  It gets even more exciting to know the jazz musician was her brother-in-law and good friend.  That personal connection leaves no doubt in my mind that Stephanie Castillo will once again deliver a powerful visual story that will move us, entertain us and enrich us. I can't wait to see it!"
Jeannette Paulson Hereniko, President, Asia Pacific Films, Honolulu

Stephanie is an EMMY Award-winning documentary filmmaker with PBS credentials, and she is creating her 10th documentary with NIGHT BIRD SONG. Her documentaries have focused on biographies, social and cultural histories, and forays into subjects outside her usual interests, such as opera and cockfighters in America. As a former newspaper journalist, her storytelling is compelling and well-researched.  She has written, directed and produced nine documentaries, several in partnership with others.

Her film partners are in Honolulu, Los Angeles, Washington DC, Dallas, Arizona, and on the Hawaiian island of Kauai where she is based.  She is a consultant to other filmmakers and teaches digital storytelling to community college students. In 2000, she graduated with an Executive MBA from the University of Hawaii at Manoa and was an American Association of University Women Selected Fellow.

Thomas Chapin was her friend and brother-in-law.  She began following his music career when her sister Terri, who later became Chapin's wife, told her to "Watch him--he's an original and will be in the jazz history books one day." As he rose to prominence in the downtown NYC scene and on the big jazz stages around the world, Stephanie had a chance to showcase him and his trio in Honolulu in 1993.  She produced a short video for PBS Hawaii of the Thomas Chapin Trio performing at the Honolulu Academy of Arts' Doris Duke Theater. Sadly he passed away from leukemia five years later at age 40.  It is time to tell his remarkable, awe-inspiring story, says Stephanie.

More on Stephanie's long and successful filmmaking career can be found on her website, www.olenamedia.com

When fans and friends of Stephanie's work learned she was launching her 10th film, they sent their praise:

Thomas Chapin, Night Bird Song” will capture the spirit and feeling of her subject as she consistently does with her heart-filled documentaries. You go girl!
Vivian Hillgrove, Editor, Santa Rosa, California
Stephanie is good friend and a great documentary filmmaker. She especially excels when telling the story of another person’s life.  I had the good fortune to be able to collaborate with Stephanie on the making of our documentary about Father Damien of Molokai, AN UNCOMMON KINDNESS.  I very much look forward to seeing her next film.  I know the personal nature of this story about her brother-in-law/jazz musician, Thomas Chapin, will inspire Stephanie to produce her best work yet.
Walter Josten President, Blue Rider Pictures, Irvine, California

Congratulations on your 10th film, “Thomas Chapin: Night Bird Song”! I’m especially excited because jazz is my bug. In 1973, I left Hawai‘i for San Francisco to study jazz, Bay Area-style and ended up learning about life while collecting hundreds of vintage jazz albums -- Charlie Parker, Dexter Gordon, Miles, Herbie, Benson, Chick, Oscar, Art Tatum, you name it, I have it. I look forward to watching “Night Bird” because I know Stephanie’s unique and creative style of capturing human emotion and compassion on film. I know I’ll feel the jazz.
Art Umezu, Kauai Film Commissioner, County of Kauai, Hawaii

Stephanie Castillo's visions as a filmmaker allow her to bring truthful and authentic emotion to her work....  More professionals in film should be that courageous about their opinions, sharing diverse and multiple perspectives to further enrich our collective lives, supporting greater dialogue and exchange.
Meleanna Meyer, fine arts painter/Native Hawaiian filmmaker, Honolulu